It has seemed incomprehensible to some that there should be any need or desire for horror fiction when one need only look to the newspaper or out the window to find things to make one’s blood run cold.

But Professor Nobody, who makes his appearance in Thomas Ligotti’s Songs of a Dead Dreamer, explains why it is exactly, in moments of turmoil and distress, that we turn to horror fiction, not as individuals, but as a collective:

“In transforming natural ordeals into supernatural ones, we find the strength to affirm and deny the horror, to savor and suffer them at the same time. […] In story and song, we could entertain ourselves with the worst we could think of, overwriting real pains with ones that were unreal and harmless to our species.”

With that in mind, consider picking up the following titles the next time you are at loose ends and looking for something to read.

Beyond a barrier blocking off a portion of the Floridian peninsula, some kind of otherworldly natural rejuvenation is at work. In Annihilation, the first book, we join the 12th expedition, this time comprised entirely of female scientists, across the barrier as they seek to understand what is happening in Area X,. Few things in that otherworldly Eden are as they first appear.

The first installment works excellently as a stand alone narrative, introducing us to Area X and establishing the tantalizing promise of the Southern Reach, the government department tasked with understanding Area X. The subsequent two books take you deeper into the mystery of Area X and the Southern Reach to find answers that are as strange and satisfying as the questions to which they correspond. Vandermeer’s lush prose is rivaled only by the Florida landscape it describes and the elegant tapestries of his characters. 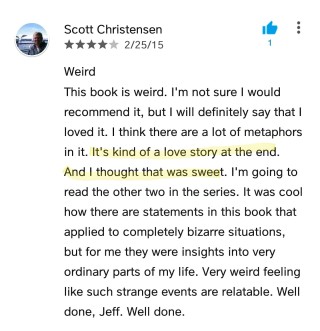 Ultimately, Jeff Vandermeer’s alienating masterpiece might best be described as it was by the reviewer Scott Christensen on Google Books: “It’s kind of a love story at the end. And I thought that was sweet.”

The first anthology out from Dim Shores, a press established by Justin Steele and Sam Cowan in 2015 dedicated to Weird and dark fiction. The press has has made a name for itself publishing chapbooks from esteemed Weird fiction authors including Jeffrey Thomas, and more recently, Gemma Files and Joseph S Pulver, Sr.

Looming Low Vol. 1 serves as a whistle-stop tour of contemporary Weird fiction. While it features works by established names like Michael Cisco, Brian Evanson, Livia Llewellyn, and S.P. Miskowski, it also includes stories from less immediately familiar names. As a whole,  it serves as an excellent introduction to Weird fiction and its impressive variety of styles and topics; from the supernatural to the mundane, the romantic to the fraternal, and beyond, the human heart is metamorphosed before your eyes as it tangles with the incomprehensible and the irreconcilable.

Songs of a Dead Dreamer and Grimscribe by Thomas Ligotti

Thomas Ligotti has been described as a mix between Kafka and Lovecraft. His personal brand of transcendental horror, as if Walt Whitman and Henry David Thoreau had ascended to that higher spiritual plane only to realize that life is something worse than a cosmic joke, is utterly unlike anything else. His dreamy, rotting post-industrial landscapes peel back to reveal humanity dancing on the end of a string, while elsewhere, close by, the universe laughs.

Perhaps most effectively, unlike the hapless or blissfully ignorant characters which populate Weird and Science Fiction, who unwittingly stumble upon unimaginable horrors, Ligotti’s characters often walk to their doom with some foreknowledge. His protagonists are seekers after truth, aware that they are damning themselves by looking but unable look away.

The Penguin classics single volume re-release of his first and second collections of short stories (Songs and Grimscribe, respectively) is an opportunity for everyone to re-/discover this master of dread.

This site uses Akismet to reduce spam. Learn how your comment data is processed.