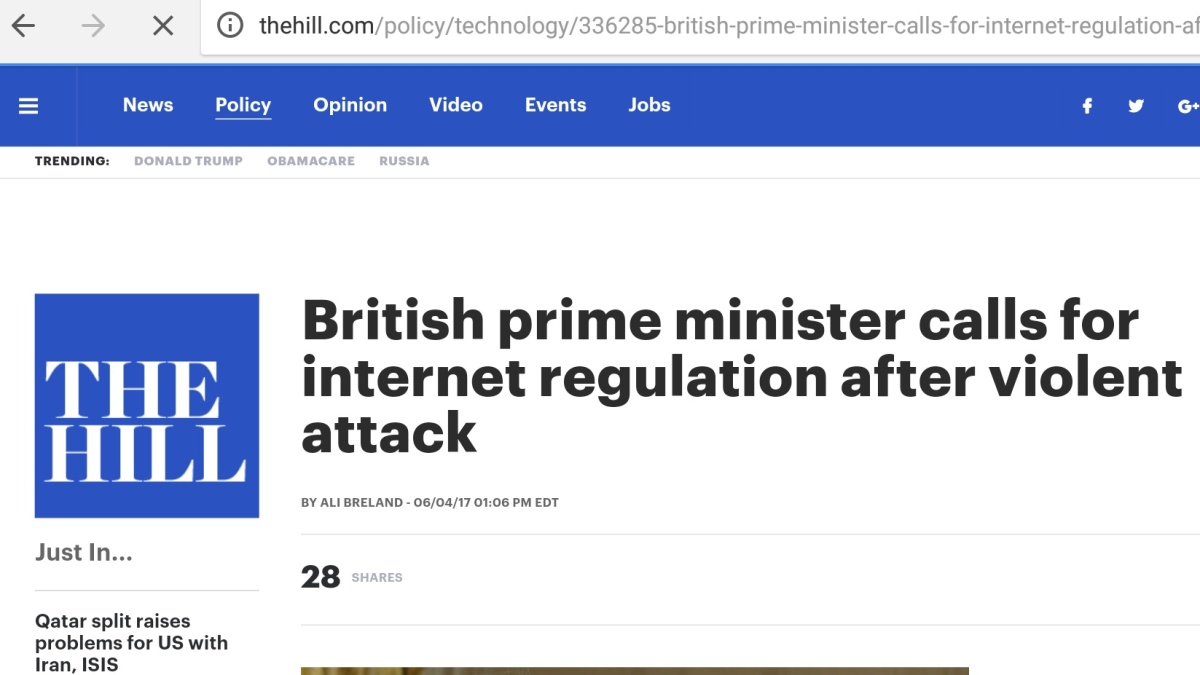 The recent terror attacks in London are disturbing and dreadful crimes. But hearing that British PM Theresa May feels that there appropriate response is greater regulation of the Internet makes me worry about where this well-meaning concern (or misplaced hysteria) will lead us.
This past semester I read Lawrence Lessig’s Code 2.0, for my class, “Media, Technology, and Culture” (for an overview of the book’s basic argument checkout my podcast). Towards the end of the book – in the section where he examines “latent ambiguities” where code and law either don’t quite meet or leave some room for interpretation – he says of the United States:

As the global society attempts to manage a world where extremism and linked violent action become more prevalent and more visible, we must realize that it is the legacy of the First Amendment and of American democratic values that allow it. The right to freedom of expression is enshrined into the current structure of the internet in a way it would be impossible (certainly for equal reach) to achieve in “real life”.

There is a lot to be said for making the gap between legal speech and the speech that is possible on the Internet. In recent years, we have had a crash course in the negative outcomes that complete freedom can generate. From Gamergate and doxxing, to the radicalization of men and women by neo-Nazi ideologues and extremist jihadi ideologies. The links between the things we read and see and what we do are becoming starkly visible.

But does that linkage justify a limiting of free speech by government and corporate/commercial entities?

The most obvious question is: how does one determine what constitutes an extremist ideology?

It might seem easy to say it’s to cut down on neo-Nazi rhetoric or propaganda from the Islamic State. But where do radical Leftists and Libertarians who argue for the toppling of the State fall? How do we decide what counts as “humor” and what constitutes a real threat? (see: Kathy Griffin) If we’re seeking to destroy propaganda or misinformation, which debates remain open and which are closed? The Holocaust? Global warming?

It is never easy to walk the line between liberty and security. In today’s world, one which feels ever more dangerous, we in the West are hardpressed to choose between our way of life, and the lives of our fellow citizens.

All arguments for liberty are “slippery slope” arguments, and as such I wish to avoid them. All I can hope is that we seriously consider whose interests are best met through regulation of our online speech.

Trials of Communication and Triumphs of Empathy, a review of Avi Silver’s Two Dark Moons

Future Imaginary and the role of Horror